The common scenario in major sports is two teams facing each other, with a divided audience cheering them on.  This has been the experience of many sports spectators, from the time they attended their Little League games, to their high school football games.  Generally, the rooters of the home team are perched in the large bleachers, while the folks that drove across town to see their team at an away game sit in the smaller stands.  Once in a while a group of devotees of the opposing team sits amidst the home town fans, causing consternation but rarely an outright outburst.

NASCAR fans, some of them driving hundreds or flying thousands of miles, arrive at raceways and speedways across the country.  They never know whom they will be watching the race with, or what driver or drivers they support.  Instead of two teams, all of the teams are assembled in one arena (akin to having all 32 NFL teams at one stadium at one time), and battle on the track for every fan in attendance.

Looking around the audience a fan can see the flags, signs, t-shirts, and hats of every driver with the resources to produce them.  The amalgamation of fans could not be more thorough than if they were dropped randomly from a helicopter to their seats.  Harvick fans next to Busch fans, Bowyer fans next to Wallace fans, or even Earnhardt fans next to Gordon fans (yes, fans still follow drivers who have retired).

I have attended several races, and I have always been impressed with the melting pot of fans, and the camaraderie they showcase.  Leaving a raceway late at night with a large group of people whom are tired, sun- and wind-burned, and some quite inebriated, was never something to be feared.  NASCAR fans were a step above in their ability to get along, despite differing allegiances.

In 2020, the Covid virus descended upon us, and changed most everything.  Things we once would have considered inconceivable are now a part of our daily routines.  Mask-wearing, children home from school for months at a time, and small businesses closing for good are just some of the terrible outgrowths.  For the time being, attending a race is either not possible, or only under the strangest of restrictions.

The stress from that has been compounded by a political year from hell itself.  Families and good friends have been torn apart by the events of the Presidential election.  Voices are either being stifled, or unfairly amplified.  People have become so convinced that their opinion is the right and only opinion, all others be damned.  Those yearning for the words of God are not able to go to church to hear them to help quell the inner thunder, and some are returning to their addictions to get them through.  I am sure there are some people that are unaffected by current events, but I am also convinced most of us are touched by everything and are suffering in one way or another.

I find myself wondering how those amicable NASCAR fans would be, if given the chance to debate today’s issues with their racing compatriots (safely safe-distancing, and wearing masks, of course)?  I would like to think they could be the people I have witnessed at racing events who managed to overlook their differences, and love each other no matter where their loyalties laid?  The people who at least used-to-be a step above in my eyes?  I pray it might be so. 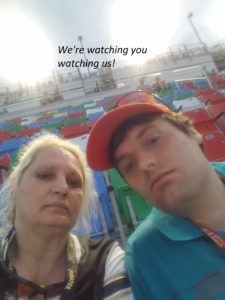